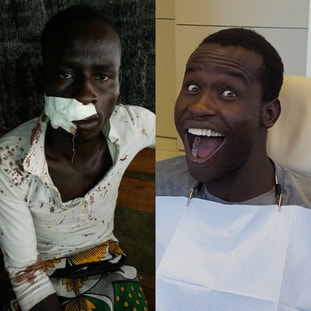 ​Nicodemus is a bright, hardworking, and caring young man. As the oldest of six orphaned youth, he feels immense responsibility to take care of his five younger brothers. "I'm their only hope," was his comment, "I am the bridge that is going to allow them to pass into success in life." At the age of 13, members of New Hope Children found him living on the streets and searching for food scraps for his brothers in the local landfills and alleys of his town in Kenya. His mother had recently passed away, leaving an eight month old behind. "I needed to feed my siblings so I would take the scraps of food from a local hotel [restaurant] that were scraped into a bucket under their sink. I did this again and again until I realized the dishwasher was also spitting into that bucket."

In December of that year Nicodemus was rescued by New Hope Children and taken to a local safe house. By January of 2010, Nicodemus started to receive a proper education with food, daily needs, medical support and counseling provided. He was the first child at the New Hope Center to pass the difficult high school entrance exams. Nico then started to prepare for the month long exit exam process to graduate high school.

In July of 2015, Nicodemus was severely beaten by two inebriated teachers over a misunderstanding. They had taken a machete-like object to his face and hit him repeatedly until they knocked him out. They made him sleep in a storage closet for the night and didn't contact the Center until the next day. The teachers have since been prosecuted and jailed.

But with no access to proper medical treatment in their remote area, Nicodemus began to lose hope. He was missing four teeth, had a concussion and facial scars, and began having frequent night terrors. To add to the pain, he was forced to go back to the school he was attacked at to take the month long exit exams in order to graduate.

After hearing his tragic story, Face Forward teamed up with New Hope Children to help give Nico back his smile. Face Forward pulled together a team of plastic surgeons, dentists and counselors to help restore Nico's smile, with scar revision, teeth replacement and most importantly emotional support and counseling. After several months in the States undergoing treatment, Nicodemus returned home to Kenya with a restored smile, hope, and new vision for his future.  His new journey is just beginning.  Nicodemus, has laid out a detailed five to ten year plan of how he will work hard, having a business during the day and going to college at night, all with the goal of having a music recording studio someday so he can support his siblings. We are so proud to be a part of Nico's healing journey, to witness his transformation, and excited to see what amazing things he does next!​​