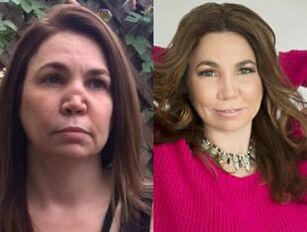 For ten years, Donna was a victim of domestic abuse, and for 10 years wouldn’t leave the house unless she absolutely had to. Her partner isolated her from family and friends - the people she loved.  She feared for her life constantly, but didn’t want anyone to know how bad it was. There were times when Donna was beaten so badly she could not move for up to two weeks. He would hit her in the head, kick her, pound on her shoulders and back, in addition to the emotional abuse. A particularly violent attack destroyed her nose, leaving her with no structure or framework.
​
Donna only escaped the continued abuse when her partner died from Hepatitis C complications.  With one phone call, her family was there to save her. Since the night he passed, Donna has worked to rebuild her life and self worth. She is in ongoing counseling for support for anxiety and PTSD, and when she came to Face Forward as a new patient, she had finally reached a point in her life when she felt strong enough for others to truly hear her story. She had lived too many years with her nose as a constant reminder of her painful past.  The reconstruction of her nose was the final step in truly helping her along her healing journey, reconstructing her inner being, and her life. She now looks in the mirror and sees herself as a survivor, not a victim.