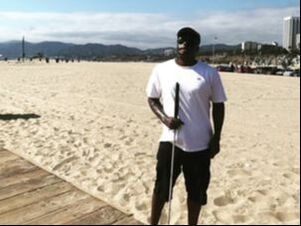 Dan Matakaya was fast asleep when his wife poured sulphuric acid solution on his face.

Matakaya was a police officer in Kisii at the time of the ordeal on the morning of September 21 2013.

"After she poured acid on me, I tried to reach out for water but she had poured water on the floor and connected power. She wanted me to be electrocuted. I screamed for help and my neighbors took me to hospital,"

Unfortunately, the acid solution ate into his skin and that was the beginning of multiple surgeries in Kenya.

The neighbors rushed him to Hema hospital in Kisii for treatment.

"I was given First Aid. My face was washed and I began seeing. The pain was so severe in my legs I struggled to walk. They tried to give me painkillers but there was no change," he told the British broadcaster.

​After two days he was transferred to Kakamega County Hospital.

"In Kakamega hospital I stayed for two days then I was referred to Kenyatta National Hospital for advanced treatment," Matakaya said.

He lost his sight during the process of hospital transfers.

"Apparently, the acid continued to work on my eyes even after and it made me go blind. If we had known better we would have kept pouring water into my eyes to dilute the acid and I wouldn’t have lost my sight."

At Kenyatta, he was admitted from September 2013 to February 2014 where he underwent 15 surgeries because the burns take time to heal.

He said the doctors did grafting, removed tissues from other parts of the body for the burns to heal from inside. The surgeries stabilized his condition but he was not fully healed. Matakaya was given a nurse who attended to him for six months while he was at home. The nurse cleaned and dressed his wounds. When he thought the wounds had healed, he went to the clinic but was admitted again at Nairobi West Hospital for further surgeries.

"Although the burns were healing, there were contractures. My hands had healed but they were stiff. The neck had also healed but it was stiff and bent to one side," he narrated.

The doctors said he had to release the contractures through surgery. Health experts also tried to open up his nostrils but they closed again a few days towards the end of 2014. In 2015, he went back to Kenyatta where he had surgery on the nose because the previous one had not been successful. Matakaya on August 25,2019 appealed to Kenyans on twitter for financial aid through the hashtag #TembeaNaDan .

He wanted to raise Sh600,000 for his treatment abroad but received Sh120,000 as reported by Nation daily.
On September 10, he received full medical sponsorship by Face Forward International.